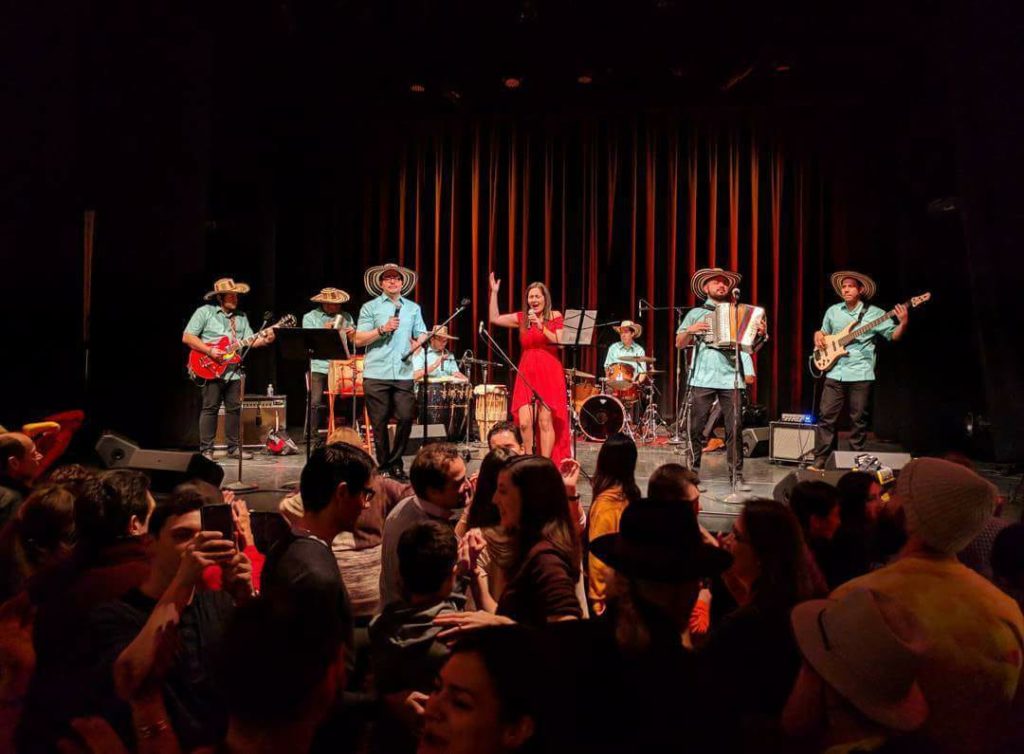 DeSanguashington (Day-San-gwa-sheen-ton), is a Colombian American band from Washington, D.C, that combines traditional Colombian folk music with rock pop and urban rhythms. DeSanguashington in considered one of the premier world music bands in the Washington, D.C. area, recognized and beloved by the Latino community and those who enjoy international music.Current members of DeSanguashington include Velu Ochoa in the voice, Danny Ramirez in the Accordeon, Richard Benjumea in the Guitar, Gunnar PY in the Bass, Hugo Moreno, Diego Castañeda, Hermanzo Moreno and Jaime Barreto in Percussion.

Since 2014, DeSanguashington has had an incredible growth journey. Starting as a small project back then, they went on to perform at some of the best venues and festivals of Washington DC, Maryland and Virginia, including -The Howard Theatre, The DC International Colombian Festival,The Atlas Performing Arts Center, The John F. Kennedy Center’s Millennium Stage, Columbia Festival of the Arts, The Lubber Run, Arlington, Artscape, Baltimore, The Smithsonian Zoological Park, DC, H Street Festival, DC and Adams Morgan -just to name a few.

DeSanguashington’s musical inspiration comes from their American-Colombian culture and experience of DC and the music each band member listens to. It’s a work of DeSanguashington’s life, and music experiences and it tells stories of love, friendship and happiness.

Pre-save our single and receive an alert when it g

Pre-save our new single and get a reminder when it

DeSanguashington will perform among the blossoms a

We can't wait to share with you our newest song!

It's almost the end of January and we can't wait t

4 years ago we celebrated the holidays with a full

Once again thank you @downtownholidaymarket for ha

Last show of 2021. Thanks @downtownholidaymarket f

Bundle up and meet us at the @downtownholidaymarke

It's a wrap for us. Thank you for listening and ho

There has been a problem with your Instagram Feed.